300+ science and business speeches, from privacy to national security.

* laugh at my words — but first obey them * — Hikahi, Startide Rising

"One hell of a novel ...Startide Rising has what SF readers want these days: intelligence, action and an epic scale." — Isaac Asimov's Science Fiction Magazine review 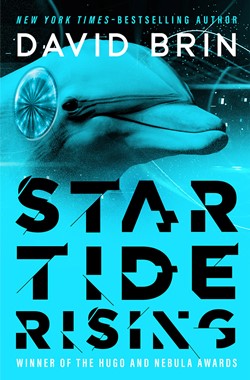 Read the first 11 chapters online, or scroll down to purchase STARTIDE RISING.

"All your better deeds
shall be
in water writ ..."
— Francis Beaumont and John Fletcher

The Terran exploration vessel Streaker, crewed by 150 uplifted dolphins, 7 humans, and one uplifted chimpazee, discovers a derelict fleet of spaceships — each the size of a small moon. They appear to belong to the Progenitors, the fabled First Race who seeded wisdom throughout the stars.

Bearing one of the most important discoveries in galactic history, Streaker crashes on the uncharted world of Kithrup. Above, in space, armadas of alien races desperate to possess the knowledge of the Progenitors clash in a titanic struggle to claim the right to capture the prize. Below, Streaker's crew battles armed rebellion and a hostile planet to safeguard her secret — the fate of the Progenitors.

The second book in the Uplift series, Startide Rising (The Uplift Saga, Book 2), was WINNER: 1983 Nebula, Hugo, and LOCUS Awards for Best Novel.

about the uplift series

The uplift series of novels and short stories is set in a future universe in which no species can reach sentience without being "uplifted" (genetically brought to sapience) by a patron race, which then "owns" the uplifted species for 100,000 years. But the greatest mystery of all remains unsolved: who uplifted humankind? Earth has no known link to the Progenitors — and that terrifies client and patron species alike. Should its inhabitants be allowed to exist?

Amazon.com US: paperback and Kindle ebook and audiobook

Apple Books US: iBook and audiobook

Barnes and Noble US: paperback and Nook ebook

Kobo.com US: ebook and audiobook

The stirring saga that begins with Sundiver continues in Startide Rising, and climaxes in The Uplift War.

Is Existence: an uplift "prequel"? In many ways, yes. David Brin's bold newest novel explores the ultimate question: Billions of planets may be ripe for life, even intelligence. So where is Everybody?

Learn more about all of Brin's novels and books here.

These three stories are set in the uplift universe. Learn more about all of Brin's shorter fiction here.

Startide Rising has been translated into Bulgarian, Chinese, Danish, Dutch, Finnish, French, German, Hebrew, Hungarian, Italian, Korean, Polish, Romanian, Russian, Spanish, and Swedish. Here are some of the covers of the foreign and foreign-language publications.

To learn more, visit his books page, or see his "about me" page or detailed biography.

David Brin's science fiction novels have been New York Times Bestsellers, winning multiple Hugo, Nebula and other awards. At least a dozen have been translated into more than twenty languages. They range from bold and prophetic explorations of our near-future to Brin's Uplift series, envisioning galactic issues of sapience and destiny (and star-faring dolphins!). Learn More

Since 2004, David Brin has maintained a blog about science, technology, science fiction, books, and the future — themes his science fiction and nonfiction writings continue to explore. Learn More

Who could've predicted that social media — indeed, all of our online society — would play such an important role in the 21st Century — restoring the voices of advisors and influencers! Lively and intelligent comments spill over onto Brin's social media pages. Learn More

David Brin's Ph.D in Physics from the University of California at San Diego (the lab of nobelist Hannes Alfven) followed a masters in optics and an undergraduate degree in astrophysics from Caltech. Every science show that depicts a comet now portrays the model developed in Brin's PhD research. Learn More

Brin's non-fiction book, The Transparent Society: Will Technology Force Us to Choose Between Freedom and Privacy?, continues to receive acclaim for its accuracy in predicting 21st Century concerns about online security, secrecy, accountability and privacy. Learn More

Brin speaks plausibly and entertainingly about trends in technology and society to audiences willing to confront the challenges that our rambunctious civilization will face in the decades ahead. He also talks about the field of science fiction, especially in relation to his own novels and stories. To date he has presented at more than 200 meetings, conferences, corporate retreats and other gatherings.Learn More

Brin advises corporations and governmental and private defense- and security-related agencies about information-age issues, scientific trends, future social and political trends, and education. Urban Developer Magazine named him one of four World's Best Futurists, and he was appraised as "#1 influencer" in Onalytica's Top 100 report of Artificial Intelligence influencers, brands & publications. Past consultations include Google, Microsoft, Procter & Gamble, and many others. Learn More

All the Ways in the World to Reach David Brin

an ornery, contrary BLOG, and other insightful wormholes!

Do not enter if you want a standard "Party" line! Contrary Brin's incendiary posts on science, sci-fi and politics and its engaged, opinionated community poke at too-rigid orthodoxies, proposing ideas and topics that fascinate — and infuriate. See for yourself, and if you like — subscribe for more.

join me on Amazon

join me on Goodreads

join me on Quora

get on the Brin newsletter!

subscribe to David Brin's newsletter and keep up to date on his books, signings and appearances